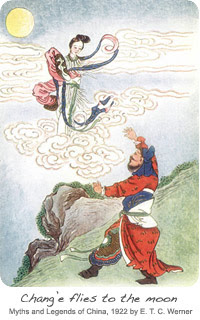 The Moon Festival is a popular Asian celebration of abundance and togetherness, dating back over 3,000 years to China's Zhou Dynasty. Also called the mid-Autumn Festival, it falls on the 15th day of 8th lunar month. (This year on September 25)

Legend - Chang Er
The Moon Festival is closely associated with the story of the Moon Goddess Chang Er, the wife of an ancient ruler who consumed the elixir of immortality and drifted to the moon. She resides in the Moon Palace accompanied by a rabbit.

Legend - Yue Lao
The Moon is also associated with Yue Lao, deity of the moon in charge of marriages. A match is made when he ties a red string between couples. Singles appeal to him for a good marriage or to meet an ideal partner.

Moon Festival Activities:
Besides the obvious, moon-gazing, Chinese families celebrate by getting together and eating. Boiled peanuts, slices of taro, rice gruel, fish and noodles are all traditional dishes to eat during the festival, but none of these takes the place of the moon cake. 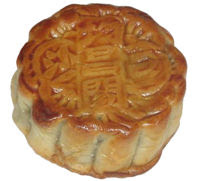 What are Moon Cakes?
Moon cakes are typically round, symbolizing the full round moon of the mid-autumn festival. They are usually made with four egg yolks, representing the four phases of the moon, and are sweet, filled with sweet bean or lotus seed paste.

History of the Moon Cake:
According to one legend, it was with the help of the moon cake that the Ming Dynasty established. Rebels used the festival as a method to convey their plans for revolt. They ordered the baking of special cakes to commemorate the festival. But what the Mongol leaders didn't know was that secret messages were tucked into the cakes and distributed to allied rebels. On the night of the festival, the rebels successfully attacked, overthrowing the Mongol government and establishing a new era, the Ming Dynasty.
Posted by chinamama at 12:30 AM

chinamama
graphic designin' teachin' craftin' mama living near charleston, sc with a pair of munchkins, a dog, a tortoise, and three lovely hens.